Quote out of Context: Solo Exhibition of Yang Fudong (curated by Gu Zheng)

Yang Fudong’s solo show in Shanghai shifts the balance of his work away from the video installations onto his photographs, in the process proving the intimate connections but also the disparities between his moving and still images.

The collection of prints that form the bulk of this exhibition include still shots from Yang Fudong’s films as well as his stand-alone photographs from across his whole career. Yang’s photographic work has always been a counterpart to his films, in that it also concentrates on the cinematic image, presenting scenes with a certain level of stylisation removing the subjects from “nature” and into the staged shot.

Yang’s work has also often played with the boundaries between the still image and the moving scene, setting up juxtapositions between a film which looks like a set-piece—maintaining a stillness within the frame that the subjects sustain even in their movement (the Seven Intellectuals series of films being archetypal of this)—and the still image which appears to be drawn from a larger narrative, held in suspension but always appearing to refer to the event within a larger narrative. The meaningful arrangements and glances of the protagonists in the photographic works Don’t worry, it will be better… (2000) and Ms. Huang at M last night (2006) record the events in their lives without really settling on any particular meaning or interpretation, leaving the audience in a state of uncertainty regarding the actual events being presented and the storyline that the individual photographs in the series depict.

END_OF_DOCUMENT_TOKEN_TO_BE_REPLACED

In order to report on yesterdays talk at the Ullens Center for Contemporary Art, in 798, between the curator Li Zhenhua and the artists Yang Fudong and Jiang Zhi, I couldn’t do any better than use UCCA’s own mechanisms: 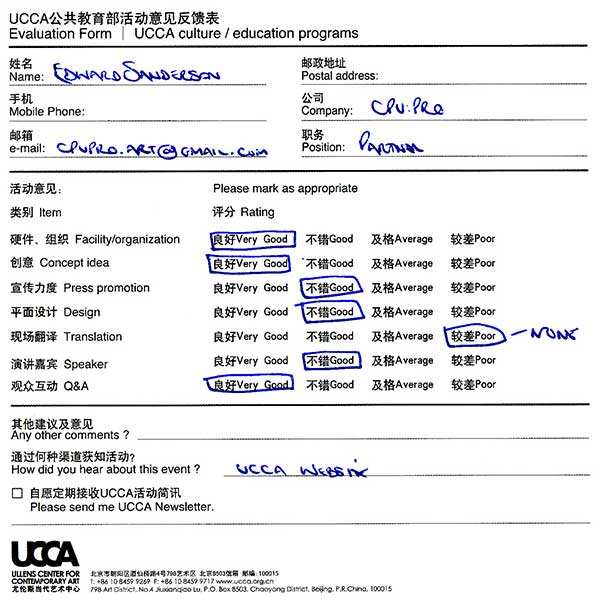 If anyone has a copy of this report, I would be very interested in taking a look (I might even cook you dinner). It would be fascinating to know what their criteria are for measuring “sentiment.” The report appears to look at a good range of artists1, so each one’s comparative results would be interesting to see. I’ve been hearing (mainly from auction results, so that’s pretty selective) that established names are recovering quickly, but the market for younger, less established artists is struggling (as one would expect). Most people I’ve talked to about this subject see these periodic downturns as, by and large, a “good” thing. I’m not denying the pain involved, but it’s a time in which everyone is forced to re-focus on their core strengths and if these aren’t sustainable then, perhaps, it’s time to move on.

The confidence in the Chinese Contemporary art market has strengthened significantly since February 2009, and is now back above the 50 level. The ArtTactic Confidence Indicator has increased from 16 in February 2009, to 57 in November 2009. The current level signals that there is more positive than negative sentiment in the art market. This is the first contemporary art market that ArtTactic has surveyed since the downturn, in which the Confidence Indicator has come in above the 50 level, which implies that the Chinese art market could be one of the quickest to recover.2

And “emerging” is always a tricky word to define, too.

It’s not that I don’t recognise that this is an interesting group of artists (and, in my opinion, it’s always good to see more of Chu Yun), and we’ve all been guilty of the odd bit of hyperbole in our time, but that last sentence…

The self-aggrandisement that’s coming through in this piece, and the way UCCA are presenting the artists in this text, actually seems to be using them as a side-line to UCCA’s own historical positioning statements – and of course that’s exactly the (overt or covert) purpose of exhibitions (and—by association—the artists involved in those exhibitions). My issue is not with the uses to which exhibitions (or artists) can be put, but with this wording that seems to revel in this programme. At the end of the day, it’s quite exciting to find a text which is so blatant about this.

To be fair to UCCA, my issues with them deserve a more considered post, but this particular press release was too galling to let slip by.